The original version of this Press Release was posted at https://www.portlandoregon.gov/parks/article/621540.

Portland Parks Commissioner Amanda Fritz and Portland Parks & Recreation Director Mike Abbate announces $2 million in System Development Charges (SDCs) dedicated toward completing the first phase of Gateway Green. The funds will allow the developmnt of the innovative new park, 25 acres of formerly unused land at the confluence of I-84 and I-205, to move forward. 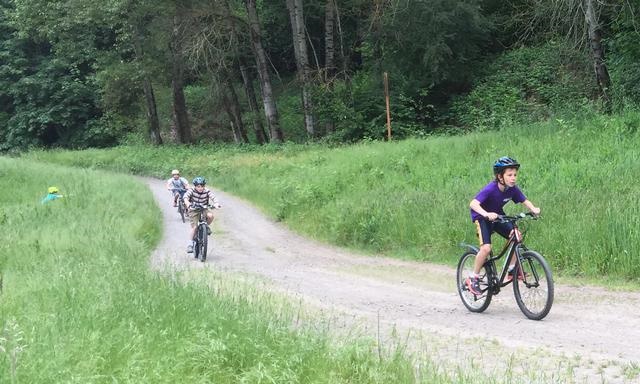 A $1 million Metro grant awarded in 2014, and $1.3 million in cash and in-kind contributions (public and private) raised by the non-profit Friends of Gateway Green (FoGG) have also funded the project. Those contributions, plus theh SDC funds earmarked by COmmissioner Fritz and Director Abbate, will allow Phase 1 of the Gateway Green project to continue.

“I’m pleased to be part of this unique endeavor,” says Portland Parks Commissioner Amanda Fritz. “Two local governments and one dedicated non-profit, the Friends of Gateway Green, teaming up on an innovative new park.  Gateway Green will be a regional destination, and a working example of how active recreation can be balanced with natural restoration and preservation.”

Gateway Green will be easily accessible to visitors, including the 26,000 Portlanders who live within 1 1/2 miles of the site, via a connection to the I- 205 multi-use path. Metro recently estimated that 250,000 people annually pass by Gateway Green via the 16.5-mile- long path. Gateway Green could be a key connection point for cycling within the city, as it also lies at the intersection of the future Sullivan’s Gulch Trail. Gateway Green functions as a regional off-road cycling destination, a site forpassive recreation, for reflection, and as a key amenity for east Portland neighborhoods including Parkrose, Parkrose Heights, Woodland Park and Hazelwood. 138,000 or 24% of Portland’s population currently reside in east Portland. By 2040, east Portland is projected to grow by 90,000, yet that part of town lacks the same access to parks and green enjoyed by other parts of the city.

“From the inspiration to the start of construction, it has taken 10 years,” says Ted Gilbert of Friends of Gateway Green.  “Without the belief, commitment and leadership of the City of Portland and Portland Parks & Recreation, it would never have come together.  We sincerely believe that what started as a grassroots effort will prove to be a gift for east Portland and the entire region. My thanks to all our funding partners and to FoGG’s Linda Robinson for her tireless advocacy for parks in general and those in east Portland in particular.”

FoGG recently completed an ambitious crowdfunding campaign to round out their fundraising efforts. FoGG’s efforts allowed for the construction of the first off-road cycling trails at Gateway Green, which are being completed this winter.

“Friends of Gateway Green came up with the idea of developing the site,” says Portland Parks & Recreation Director Mike Abbaté. “They raised the necessary funds to get the project off the ground, and now Gateway Green will be a source of pride for a diverse and fast-growing part of Portland. The park will help us to improve equity in parks services, and is a shining example of smart land use. Our sincere thanks to Metro, the Friends of Gateway Green, and all who contributed to this laudable effort.”

Future phases of construction over the next few years will enhance habitat and access to Gateway Green, and may include elements such as site design; public involvement; permitting; and bidding documents, restrooms and drinking fountains, invasive plant treatments, and land grading.

As Portland Parks &amp; Recreation commits to new parks in communities where none currently exist - and to expanding and enhancing other parks - many existing parks are at a crossroads. For decades, PP&amp;R operating funding has been cut or remained flat, forcing the Bureau to postpone rehabilitation and maintenance in every neighborhood throughout the City.  Despite the 2014 Parks Replacement Bond, passed by voters with overwhelming support, the list of needs across the PP&amp;R system is huge, and grows every year that we don’t address it.  PP&amp;R has anticipated unfunded maintenance needs totaling nearly $250 million over the next 10 years. The beautiful parks we love to visit are being held together by thousands of volunteers and wonderful employees going above and beyond the call of duty. PP&R has additional and unfunded growth needs of approximately $472 million over the next ten years.