A Look Back Into the Park's Past

Rocky Butte, formally known as Wiberg Butte, is an extinct volcanic cinder cone in Portland, Oregon. The area around Rocky Butte was scoured by the cataclysmic Bretz floods from Glacial Lake Missoula around 13,000 to 15,000 years ago, known as the Ice Age Floods. As a result a series of catastrophic floods, very thick layers of sand and gravel exist underground at Gateway Green, deposited there by the rushing water which slowed as it encountered Rocky Butte.

In the 1940s, a large quantity of rock was removed from the quarry on the east face of Rocky Butte for use in building the new Multnomah County jail. The jail had an antiquated, fortress-like edifice constructed of huge basalt blocks. Rocky Butte Jail began receiving prisoners in 1942 and served as the primary county jail until was demolished in 1983 to make way for I-205 construction. Most of the stonework in the jail was repurposed for restoration of the Columbia River Highway. 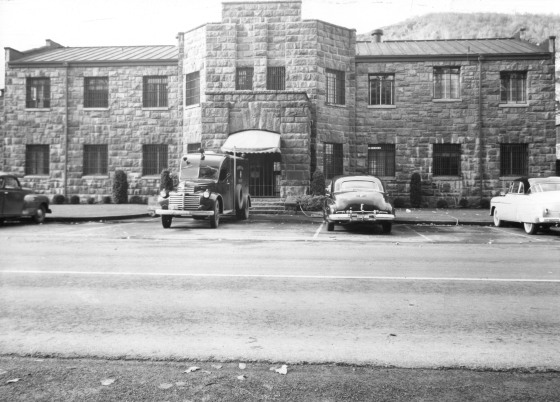 Our thanks to to the Multnomah County Archives for finding and providing photos (including the above image) showing the location of the old Rocky Butte Jail and Dan Schauer, graduate student at Portland State University, who incorporated the photos from the Archives and Google Earth images to help us understand where the former Rocky Butte Jail was located. There are a total of seven slides in his presentation, which together illustrate where the old jail was located when the I-205 freeway was constructed. See the Historical Image Comparision here.

Enjoy Gateway Green -- on a bike, or on foot