The original post of this article is on Bermstyle.com.

All words and photos by Jason Van Horn. 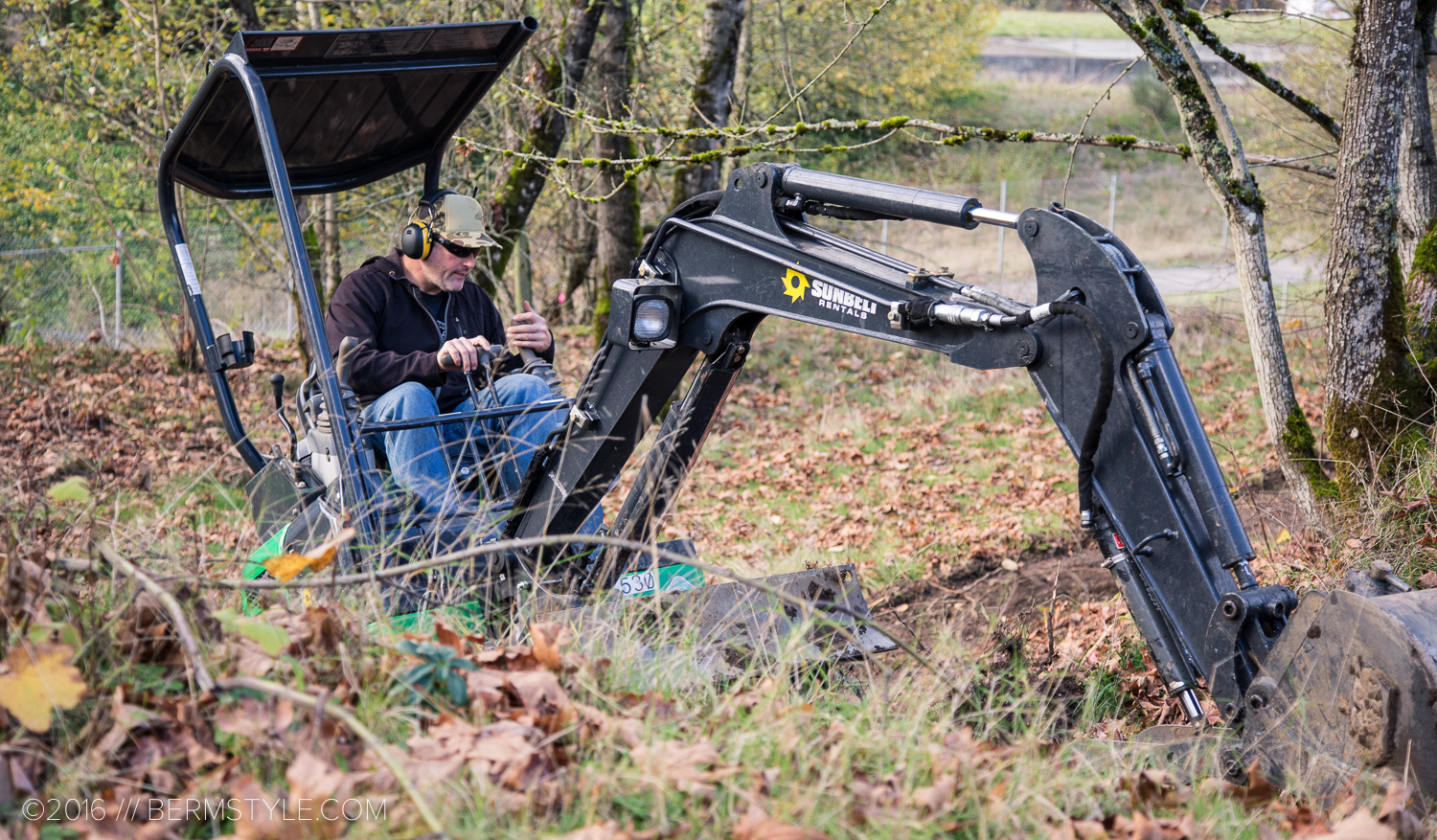 We’re seven weeks into the the Dirt Lab build at Portland, Oregon’s Gateway Green. While it’s been a bit wet, construction continues with progress on track for spring when volunteers will be gathering to dial in both single track and dirt jump lines.

Dirt jumps have been formed as well as a single track loop, both of which are visible to riders passing the site on the 205 bike path. Though the hope is to have additional material delivered over the next few months, enough soil was available to rough in the first line of dirt jumps, giving us solid idea of what the first sanctioned dirt jumps in Portland will look like. 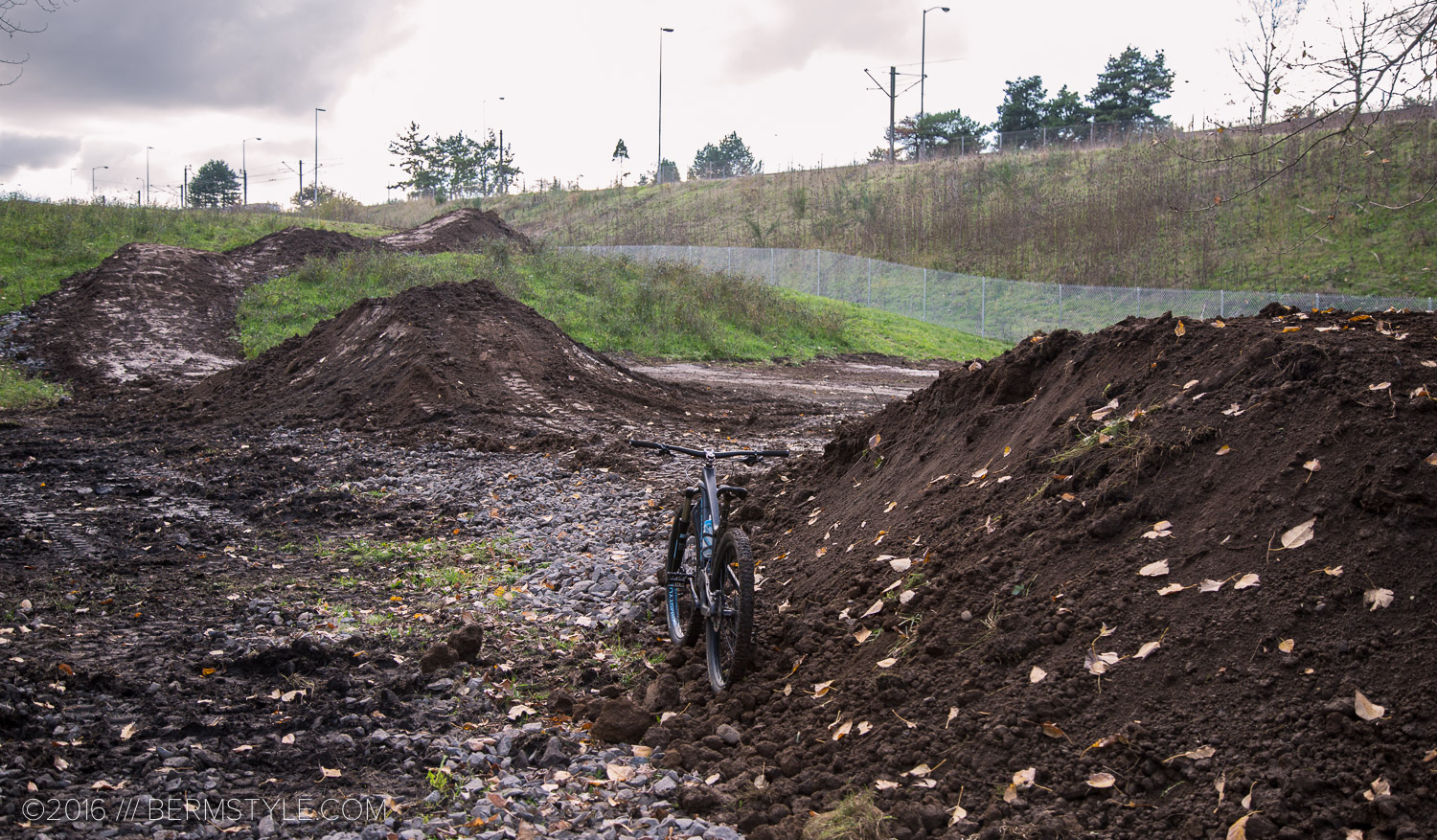 For perspective, the bike is a 29″ Evil Following. (That pile of soil is not fully compacted.) 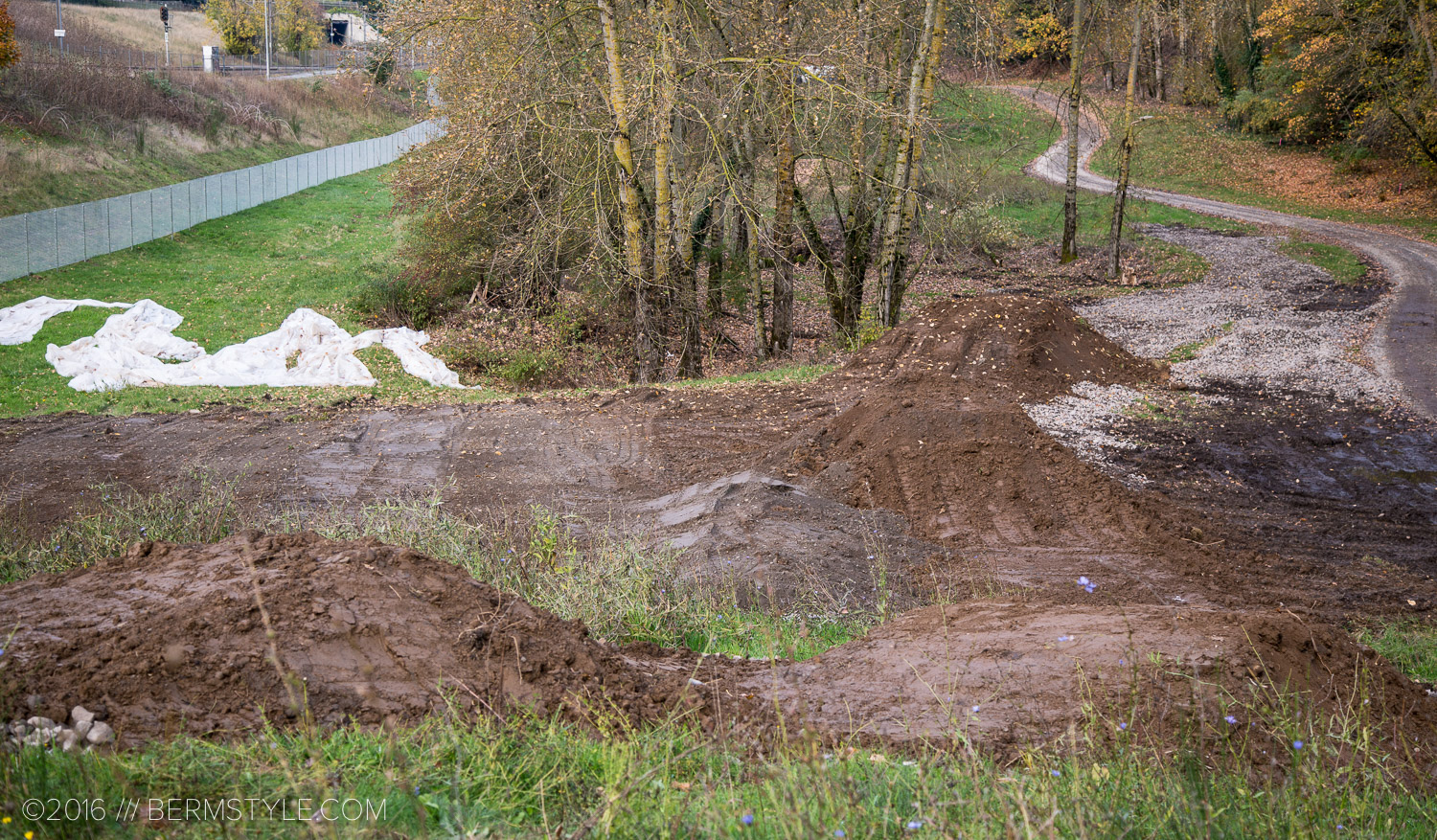 The second jump in the line, as viewed from the current starting point.

The dirt jumps are now covered to dry and settle as construction continues on the “woods line”. 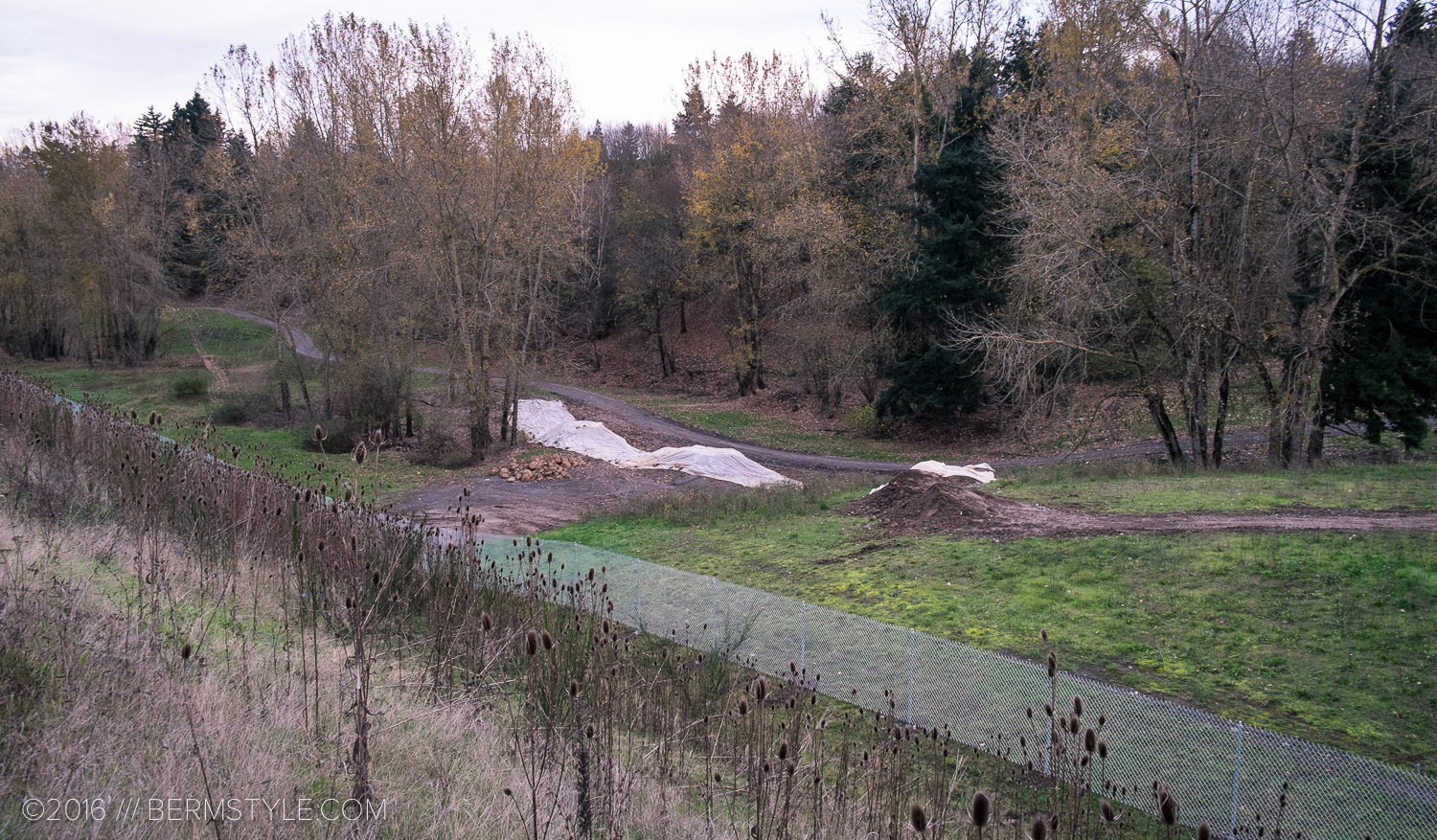 The dirt jumps as viewed from the bike path.

The initial trail through the wooded section is close to complete; routing through the wooded area, it loops most of the way around and currently ends just below the jump line, though a loop can be made via the graveled road pictured above. (Photos shot week 4 and 5, 11/11 & 11/22) 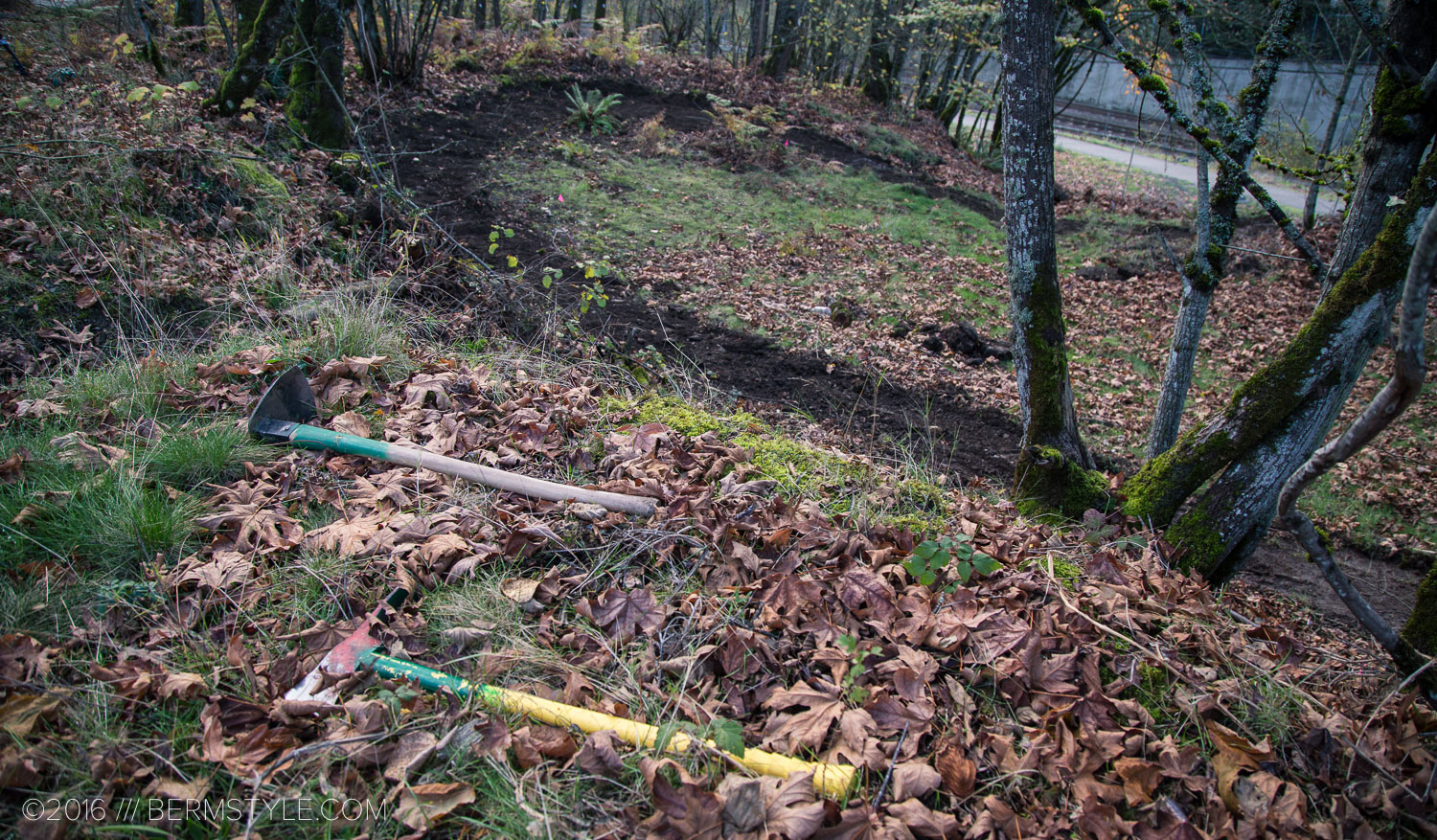 Roughing in a new section of trail. Week 4/5. 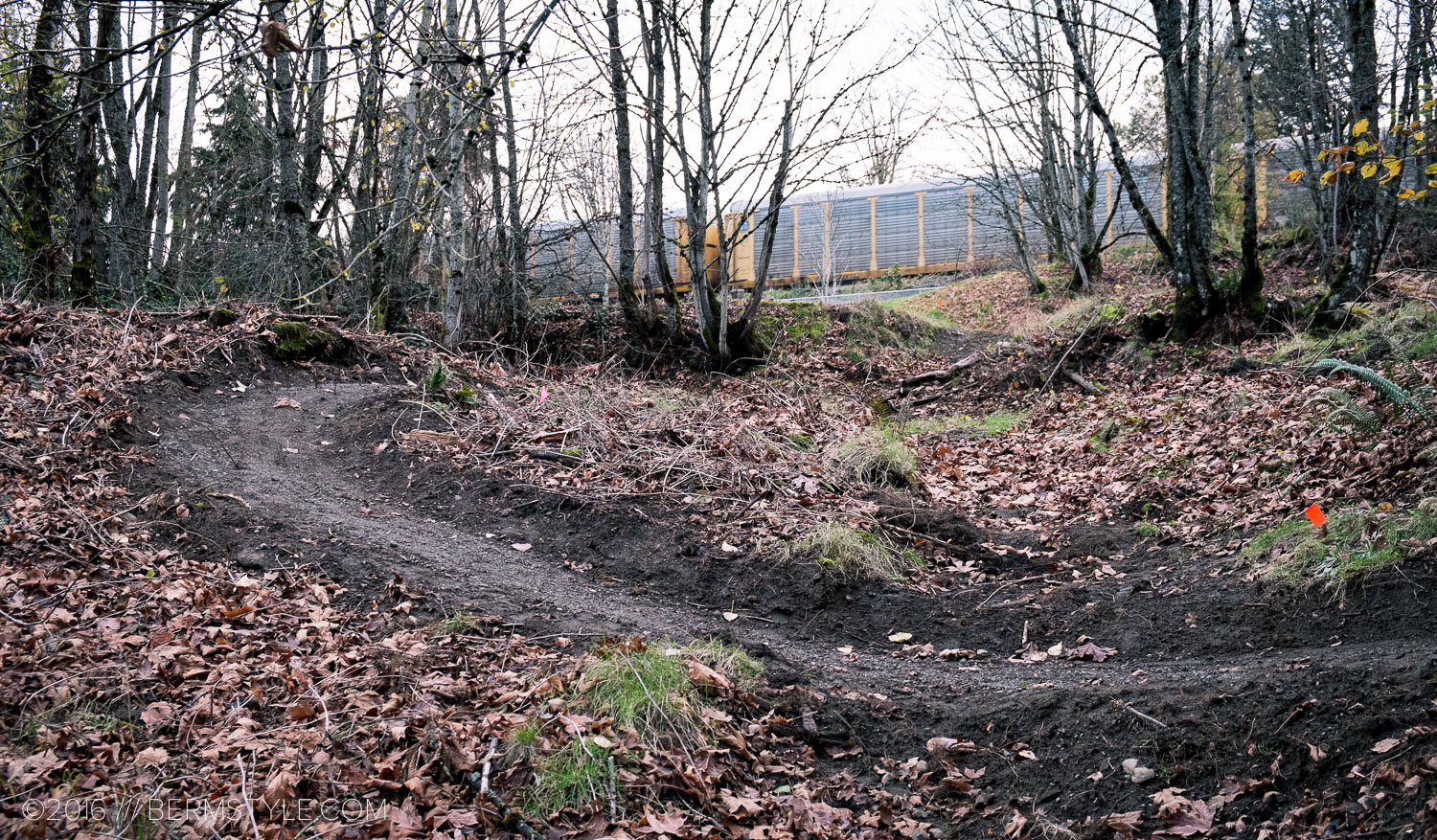 Same section of trail, (a week later) with materials added to harden the surface. 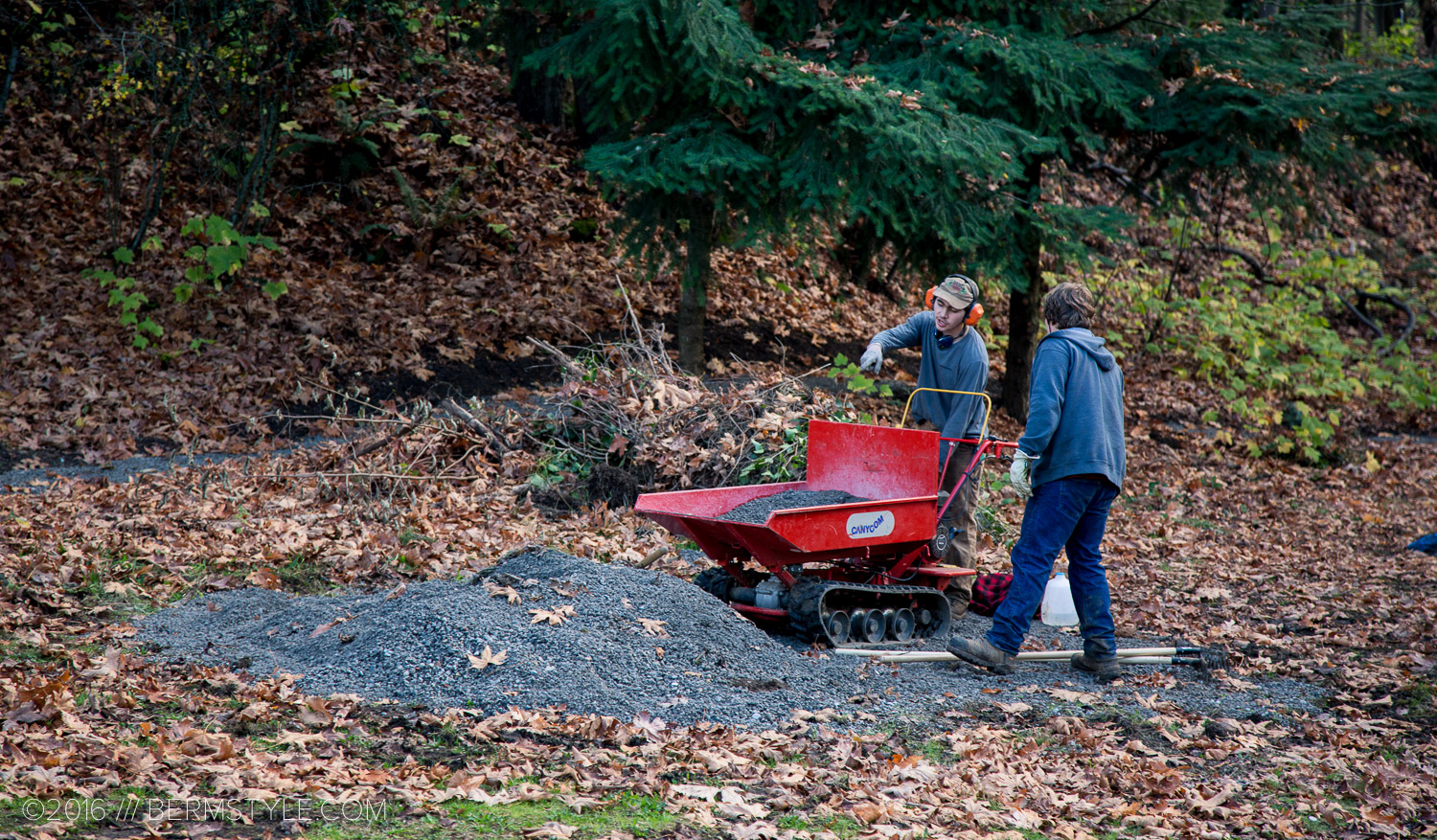 Antfarm workers adding aggregate to the soil to aid in compaction and drainage.

The initial woods line as it currently stands give us .7 miles of new, bike optimized single track in Portland. Portland Parks is planning a second, more technical line through the wooded area (yes, you heard that right) that is intended to be a bit more technical and offer additional mileage as well as challenge, as the woods line is more of a groomed flow trail suitable for a variety of riders and skill levels.

Construction of the single track along the bike path. 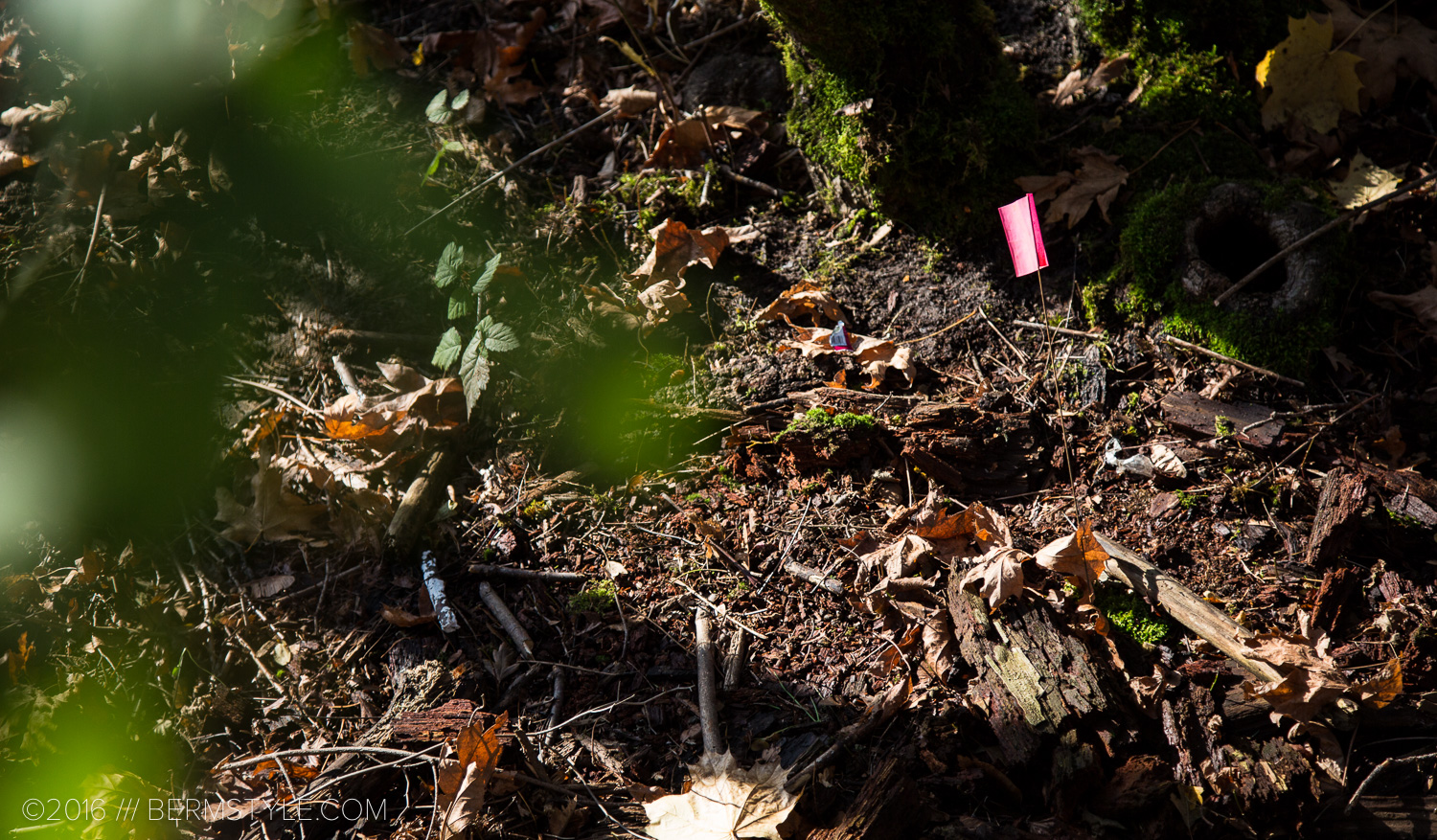 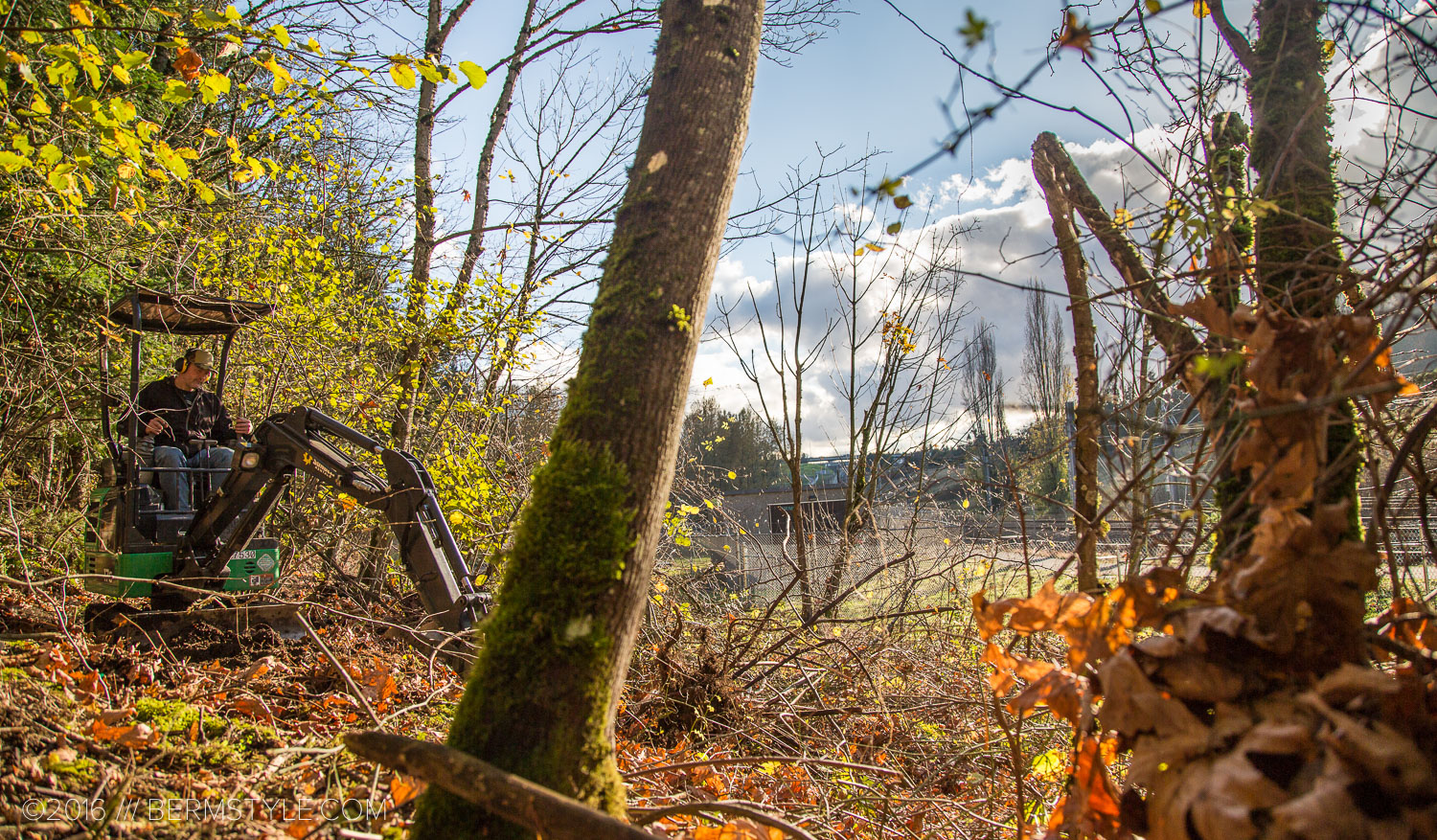 Using the mini-excavator to cut the route. As you can see, this would take a significant amount of time and energy if performed by volunteer hand crews. 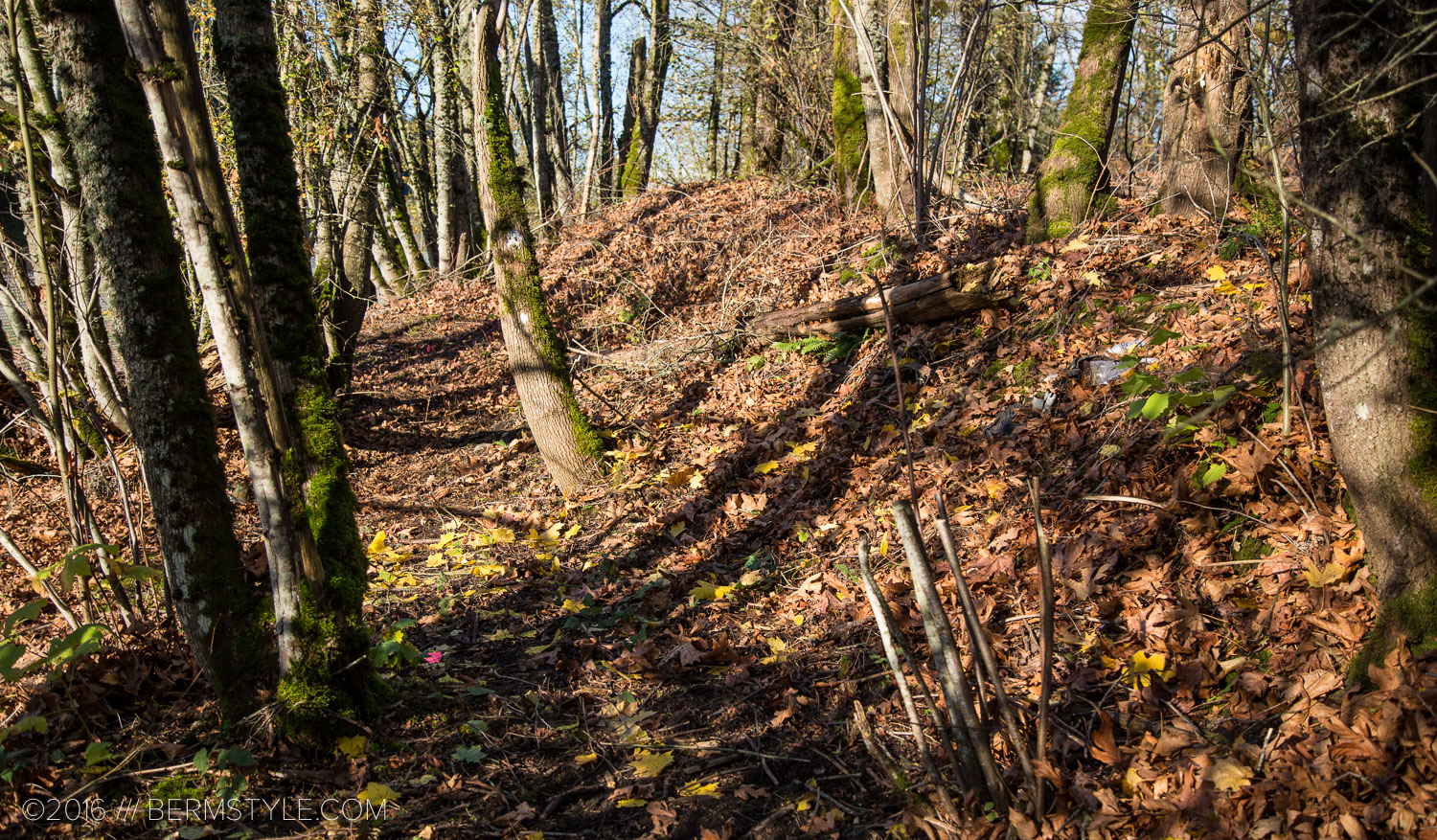 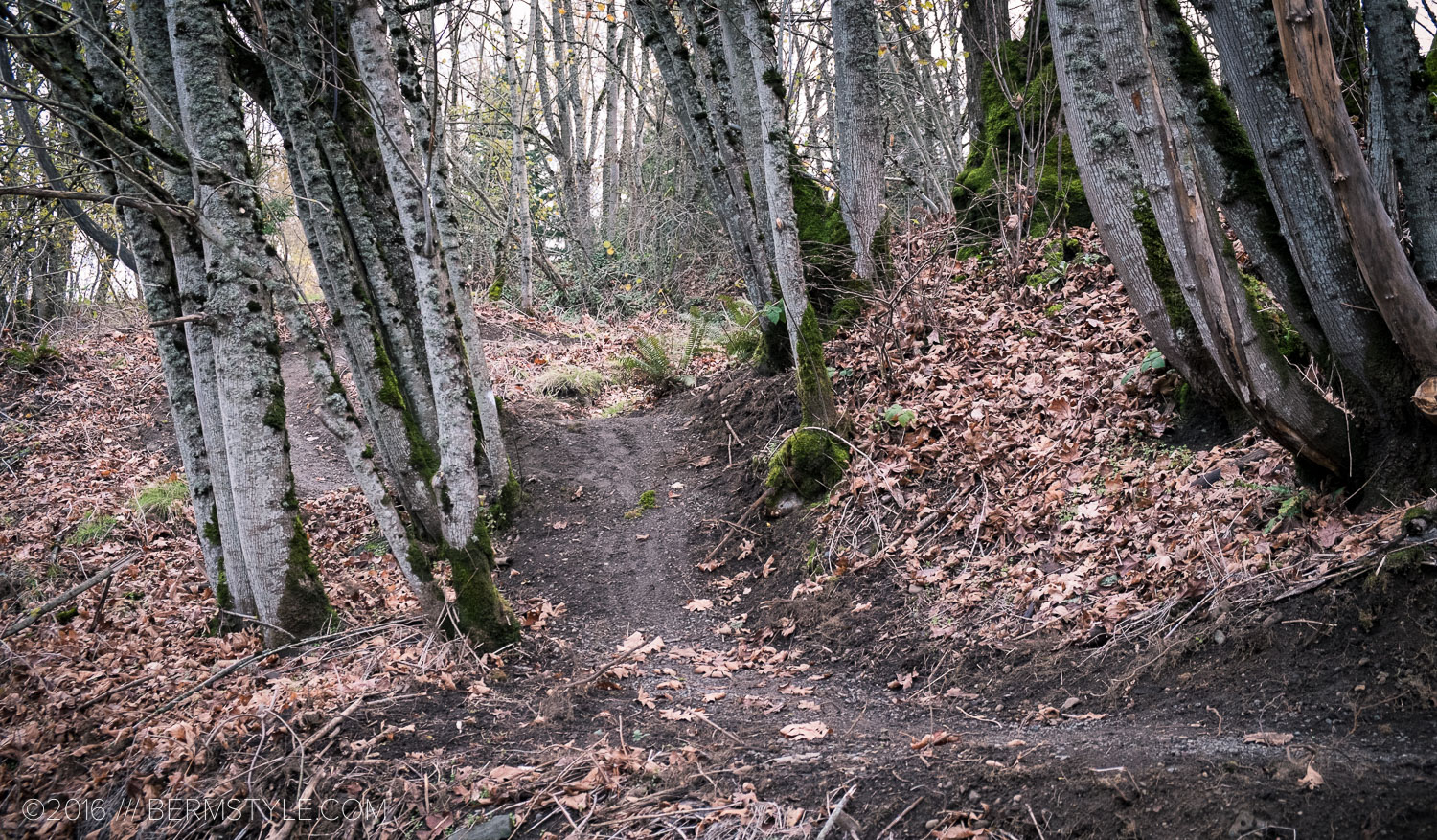 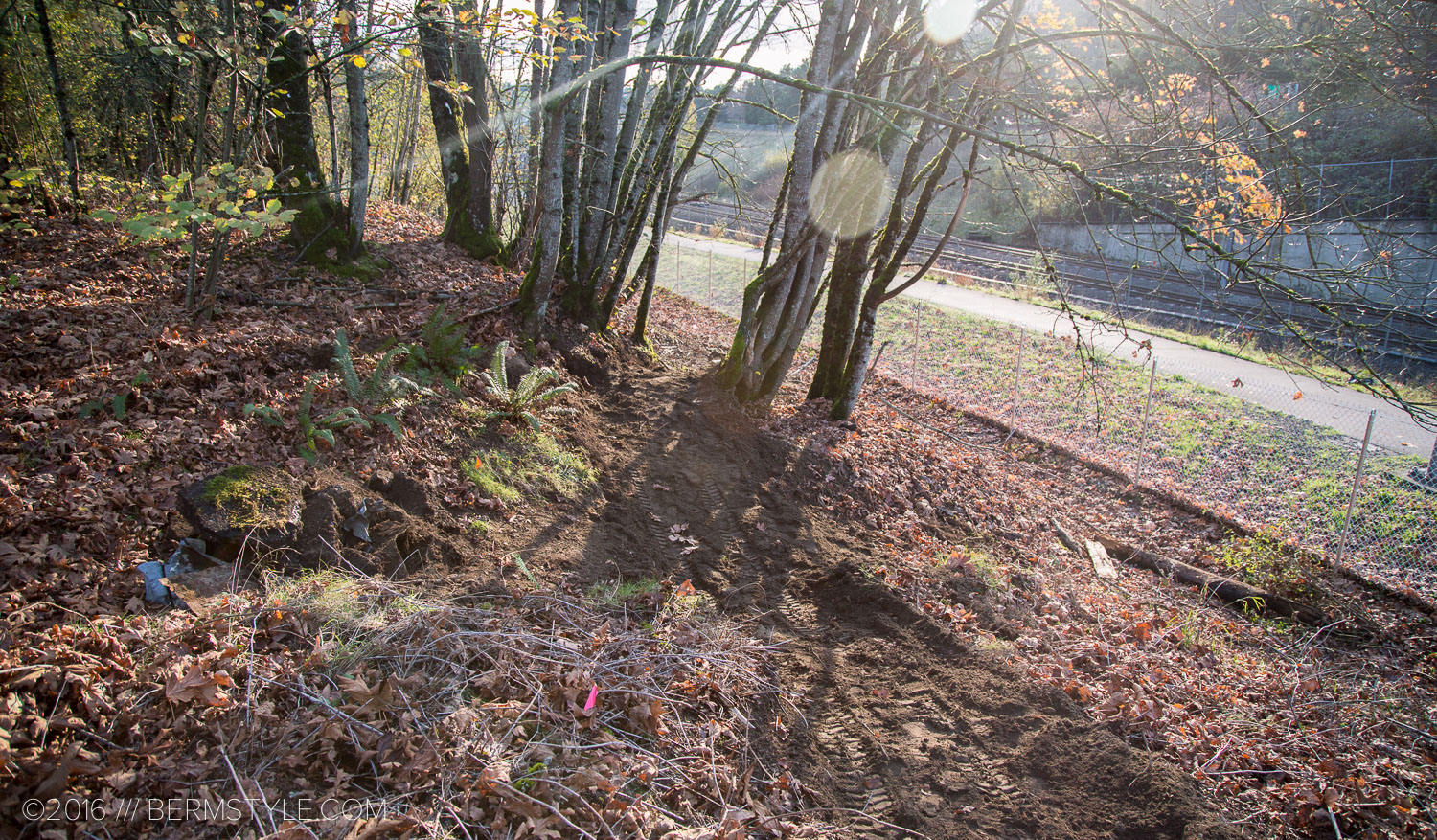 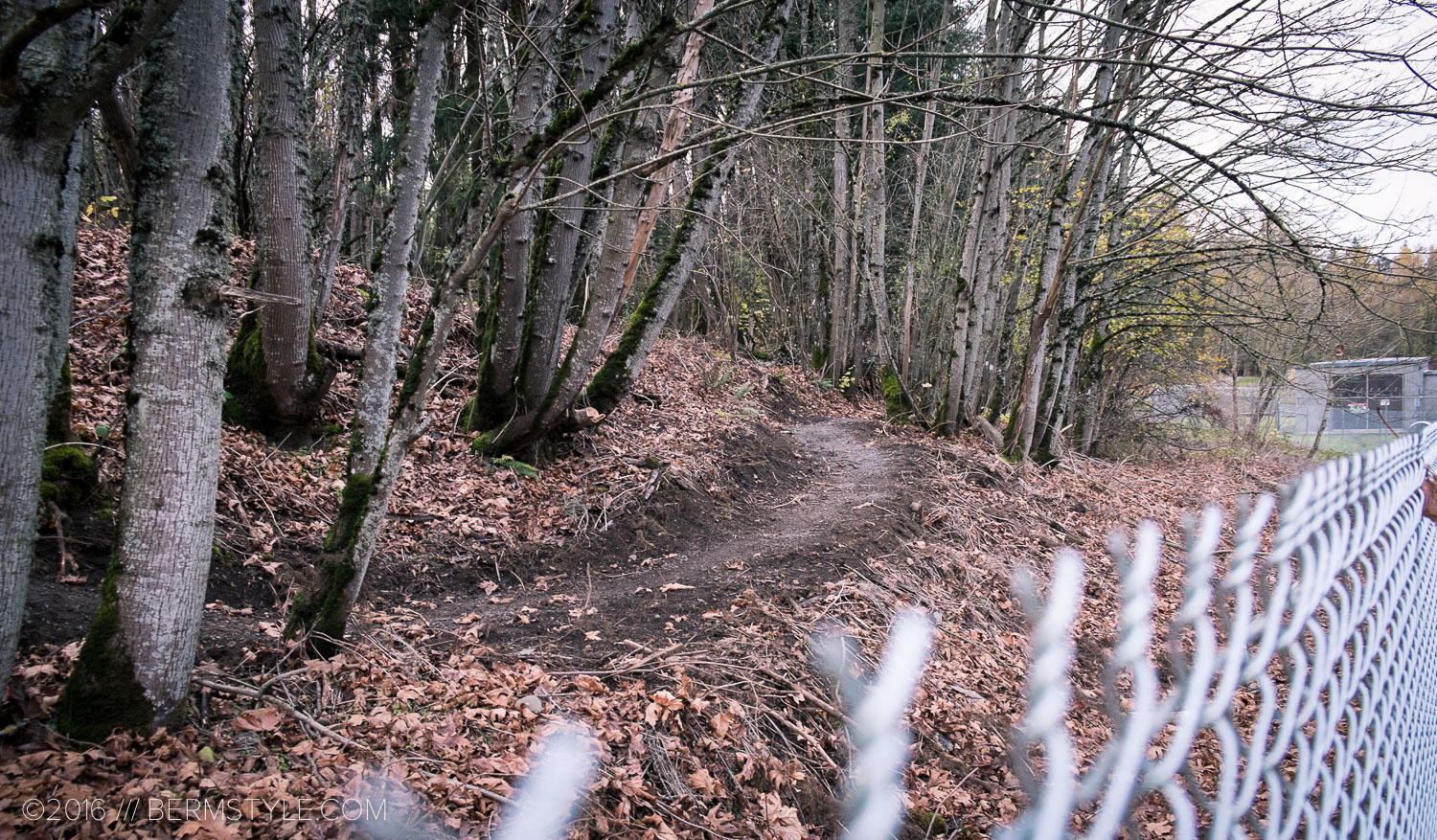 Hardened trail; as seen from the bike path.

With the paid contractors focusing on creating a more challenging route through the wooded zone, the 1/4 mile of trail still needed to close the loop may be performed by volunteers. Build dates are currently being planned, and we’ll post updates as soon as we have them. A short descent out of the south exit of the wooded line.